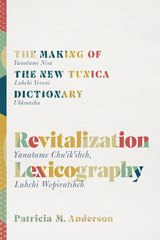 In a linguistic climate that is hyperaware of so-called language death, dictionaries have been touted as stalwarts for language preservation. When wielded by communities undertaking language revitalization, dictionaries can be designed to facilitate reversing language shift and fostering linguistic innovation. Indeed, dictionaries’ reputation as multifunctional reference materials make them adaptable to a wide variety of community needs.

Revitalization Lexicography provides a detailed account of creating a dictionary meant to move a once-sleeping language into a language of active daily use. This unique look under the hood of lexicography in a small community highlights the ways in which the dictionary was intentionally leveraged to shape the Tunica language as it inevitably changes throughout revitalization. Tunica, one of the heritage languages of the Tunica-Biloxi Tribe of Marksville, Louisiana, has been undergoing active revitalization since 2010. The current generation of speakers began learning Tunica, a once-sleeping language, through written documentation. Now enough Tunica speakers to confer amongst themselves when questionable language use arises.

Marrying both the theoretical and the practical aspects that contributed to the Tunica dictionary, this book discusses complex lexicographic tasks in a manner accessible to both academic and community readers. This work is firmly backdropped in a fieldwork approach that centers the community as owners of all aspects of their revitalization project. This book provides concrete and practical considerations for anyone attempting to create a dictionary. Contrasting examples from Tunica and English dictionaries, this book challenges readers to rethink their relationship to dictionaries in general. A must-read for anyone who has ever touched a dictionary.
AUTHOR BIOGRAPHY
Patricia M. Anderson holds a PhD in linguistic anthropology from Tulane University. She is an active member of the Tunica Language Project and head lexicographer of the New Tunica Dictionary. Her research focuses on language revitalization in Native North America and the intersection of language revitalization and technology. She is especially involved in leveraging everyday technology to encourage learner creativity and community empowerment in language revitalization efforts.
TABLE OF CONTENTS