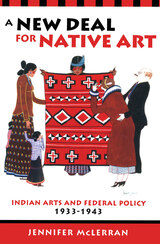 As the Great Depression touched every corner of America, the New Deal promoted indigenous arts and crafts as a means of bootstrapping Native American peoples. But New Deal administrators' romanticization of indigenous artists predisposed them to favor pre-industrial forms rather than art that responded to contemporary markets.

In A New Deal for Native Art, Jennifer McLerran reveals how positioning the native artist as a pre-modern Other served the goals of New Deal programs—and how this sometimes worked at cross-purposes with promoting native self-sufficiency. She describes federal policies of the 1930s and early 1940s that sought to generate an upscale market for Native American arts and crafts. And by unraveling the complex ways in which commodification was negotiated and the roles that producers, consumers, and New Deal administrators played in that process, she sheds new light on native art’s commodity status and the artist’s position as colonial subject.

In this first book to address the ways in which New Deal Indian policy specifically advanced commodification and colonization, McLerran reviews its multi-pronged effort to improve the market for Indian art through the Indian Arts and Crafts Board, arts and crafts cooperatives, murals, museum exhibits, and Civilian Conservation Corps projects. Presenting nationwide case studies that demonstrate transcultural dynamics of production and reception, she argues for viewing Indian art as a commodity, as part of the national economy, and as part of national political trends and reform efforts.

McLerran marks the contributions of key individuals, from John Collier and Rene d’Harnoncourt to Navajo artist Gerald Nailor, whose mural in the Navajo Nation Council House conveyed distinctly different messages to outsiders and tribal members. Featuring dozens of illustrations, A New Deal for Native Art offers a new look at the complexities of folk art “revivals” as it opens a new window on the Indian New Deal.
AUTHOR BIOGRAPHY
Jennifer McLerran is a curator at the Museum of Northern Arizona and an assistant professor of art history at Northern Arizona University. She is the editor of Weaving Is Life: Navajo Weavings from the Edwin L. and Ruth E. Kennedy Southwest Native American Collection.
TABLE OF CONTENTS