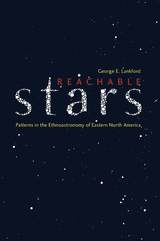 Modern Westerners say the lights in the sky are stars, but culturally they are whatever we humans say they are. Some say they are Forces that determine human lives, some declare they are burning gaseous masses, and some see them as reminders of a gloried past by which elders can teach and guide the young—mnemonics for narratives. Lankford’s volume focuses on the ancient North Americans and the ways they identified, patterned, ordered, and used the stars to light their culture and illuminate their traditions. They knew them as regions that could be visited by human spirits, and so the lights for them were not distant points of light, but “reachable stars.” Guided by the night sky and its constellations, they created oral traditions, or myths, that contained their wisdom and which they used to pass on to succeeding generations their particular world view.

However, they did not all tell the same stories. This study uses that fact—patterns of agreement and disagreement—to discover prehistoric relationships between Indian groups. Which groups saw a constellation in the same way and told the same story? How did that happen? Although these preliterate societies left no written records, the mythic patterns across generations and cultures enable contemporary researchers to examine the differences in how they understood the universe—not as early scientists, but as creators of cosmic order. In the process of doing that, the myth-tellers left the footprints of their international cultural relationships behind them. Reachable Stars is the story of their stories.
AUTHOR BIOGRAPHY
George E. Lankford is Professor Emeritus at Lyon College where he served as endowed professor and chair of Social Sciences. He has authored numerous books and articles, including Looking for Lost Lore: Studies in Folklore, Ethnology, and Iconography.
REVIEWS

“This book is an absolutely amazing work. The content and organizatio

"The folklorist-anthropologist, George Lankford, demonstrates what