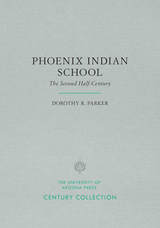 Phoenix Indian School: The Second Half-Century
by Dorothy R. Parker
University of Arizona Press, 1996
Paper: 978-0-8165-3579-8
The Phoenix Indian School was a boarding school founded in 1891 with the goal of fostering the assimilation of Native Americans into white society. The school served as a federal educational institution for Native American children from tribes in Arizona and elsewhere in the Southwest.

This book provides a history of the school from 1930 until the graduation of its final class of nineteen students in 1990. Dorothy Parker tells how the Phoenix Indian School not only adapted to policy changes instituted by the federal government but also had to contend with events occurring in the world around it, such as the Great Depression, World War II, and the advent of the "red power" movement.

Although the Phoenix Indian School has closed its doors forever, the National Park Service has undertaken an archaeological analysis of the site and an architectural documentation of the school's buildings. This history of its final years further attests to the legacy of this institution.
AUTHOR BIOGRAPHY
Dorothy R. Parker is a professor emerita of history at Eastern New Mexico University.