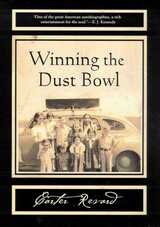 Bootleggers and bankrobbers in the Oklahoma Dust Bowl. Proctors and punters at Oxford. Activists and agitators of the American Indian Movement. Carter Revard has known them all, and in this book— a memoir in prose and poetry— he interweaves the many threads of his life as only a gifted writer can. Winning the Dust Bowl traces Revard's development from a poor Oklahoma farm boy during the depths of the Depression to a respected medieval scholar and outstanding Native American poet. It recounts his search for a personal and poetic voice, his struggle to keep and expand it, and his attempt to find ways of reconciling the disparate influences of his life. In these pages, readers will find poems both new and familiar: poems of family and home, of loss and survival. In linking— what he calls "cocooning"— essays, Revard shares what he has noticed about how poems come into being, how changes in style arise from changes in life, and how language can be used to deal with one's relationship to the world. He also includes stories of Poncas and Osages, powwow stories and Oxford fables, and a gallery of photographs that capture images of his past. Revard has crafted a book about poetry and authorship, about American history and culture. Lyrical in one breath and stingingly political in the next, he calls on his mastery of language to show us the undying connection between literature and life.
AUTHOR BIOGRAPHY
Carter Revard is the author of three collections of poetry and a professor emeritus of English at Washington University, he lives in St. Louis.