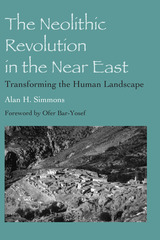 One of humanity's most important milestones was the transition from hunting and gathering to food production and permanent village life. This Neolithic Revolution first occurred in the Near East, changing the way humans interacted with their environment and each other, setting the stage, ultimately, for the modern world.

Based on more than thirty years of fieldwork, this timely volume examines the Neolithic Revolution in the Levantine Near East and the Mediterranean island of Cyprus. Alan H. Simmons explores recent research regarding the emergence of Neolithic populations, using both environmental and theoretical contexts, and incorporates specific case studies based on his own excavations. In clear and graceful prose, Simmons traces chronological and regional differences within this land of immense environmental contrasts—woodland, steppe, and desert. He argues that the Neolithic Revolution can be seen in a variety of economic, demographic, and social guises and that it lacked a single common stimulus.

Each chapter includes sections on history, terminology, geographic range, specific domesticated species, the composition of early villages and households, and the development of social, symbolic, and religious behavior. Most chapters include at least one case study and conclude with a concise summary. In addition, Simmons presents a unique chapter on the island of Cyprus, where intriguing new research challenges assumptions about the impact and extent of the Neolithic.

The Neolithic Revolution in the Near East conveys the diversity of our Neolithic ancestors, providing a better understanding of the period and the new social order that arose because of it. This insightful volume will be especially useful to Near Eastern scholars and to students of archaeology and the origins of agriculture.
TABLE OF CONTENTS


List of Illustrations
Foreword, by Ofer Bar-Yosef
Preface to the Paperback Edition
Acknowledgments
1 Thirty Years in the Trenches
2 Theories on Why People Became Food Producers
3 Environmental Context
Case Study 1. Neolithic Cobble Layers
4 Natufian
The First Villagers?—Small Steps with Big Consequences
5 A Tumultuous Time Villagers and Others During the Pre-Pottery Neolithic A
Case Study 2. Nachcharini Cave
6 Courses Toward Complexity Florescence During the Pre-Pottery Neolithic B
Case Study 3. The Negev PPNB Hunters and Gatherers
Case Study 4. Ghwair I
7 Megasites in Jordan and the End of the PPN
Case Study 5. The Jordanian Megasites
8 The Pottery Neolithic and the Beginnings of Regional Cultures
Case Study 6. Tel Wadi Feinan
9 And on the Islands The Colonization of Cyprus
Case Study 7. Research in Cyprus
10 The Path to the Present Genesis and Exodus—The Neolithic Experience
References Cited
Index