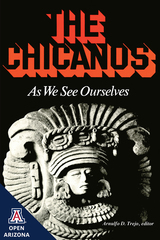 Thirteen Chicano scholars draw upon their personal experiences and expertise to paint a vivid, colorful portrait of what it means to be a Chicano.

“We have come a long way,” says Arnulfo D. Trejo, editor of this volume, “from the time when the Mexicano silently accepted the stereotype drawn of him by the outsider.” He identifies himself as a Chicano, and his “promised land” is Aztlán, home of the ancient Aztecs, which now provides spiritual unity and a vision of the future for Chicanos.

In these twelve original compositions, says Trejo, “our purpose is not to talk to ourselves, but to open a dialogue among all concerned people.” The personal reactions to Chicano women’s struggles, political experiences, bicultural education and history provide a wealth of information for laymen as well as scholars. In addition, the book provides the most complete recorded definition of the Chicano Movement, what it has accomplished, and its goals for the future.