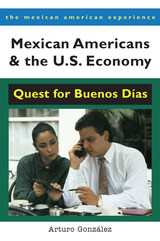 Mexican Americans and the U.S. Economy: Quest for Buenos Días
by Arturo González
University of Arizona Press, 2002
Paper: 978-0-8165-1977-4
As workers and consumers, Mexican Americans are a viable—and valuable—part of the broad U.S. economy. Despite that many are hindered by low education (and consequently low wages) and limited opportunities, they have continuously struggled for, and continue to seek, better days and the opportunity to realize their share of the American dream. This book examines the problems that Mexican Americans have experienced in attaining economic parity with non-Hispanic whites. It examines four major topics of particular concern to the economic status of the Mexican American community: - immigration, reviewing the Bracero Program, the Immigration Reform and Control Act of 1986, legislation from the 1990s, and the problems faced by immigrants today - education, stressing the importance of economic incentives to invest in education - wealth and poverty, evaluating opportunities and roadblocks as Mexican Americans aspire to middle-class standards of living - the labor market, covering such topics as employment, income, and discrimination. Arturo González has drawn on recent census data to present for the first time in one volume a detailed economic analysis of three generations of Mexican Americans. These statistics reveal a people who are steadily improving economically and provide evidence that stereotypes of Mexican Americans are outdated or erroneous. Mexican Americans and the U.S. Economy shows that economics is an important aspect of the Mexican American experience. The book helps broaden students' understanding of the community’s ongoing struggle, putting the quest for buenos días in clearer perspective.
AUTHOR BIOGRAPHY
Arturo González is an economist at the Mexican American Studies and Research Center at the University of Arizona. His research focuses on the education and labor market outcomes of immigrants and Latinos in the United States.
TABLE OF CONTENTS