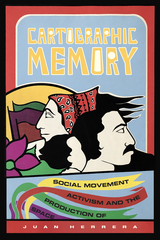 In Cartographic Memory, Juan Herrera maps 1960s Chicano movement activism in the Latinx neighborhood of Fruitvale in Oakland, California, showing how activists there constructed a politics forged through productions of space. From Chicano-inspired street murals to the architecture of restaurants and shops, Herrera shows how Fruitvale’s communities and spaces serve as a palpable, living record of movement politics and achievements. Drawing on oral histories with Chicano activists, ethnography, and archival research, Herrera analyzes how activism has shaped Fruitvale. Herrera examines the ongoing nature of activism through nonprofit organizations and urban redevelopment projects like the Fruitvale Transit Village that root movements in place. Revealing that the social justice activism in Fruitvale fights for a space that does not yet exist, Herrera brings to life contentious politics about the nature of Chicanismo, Latinidad, and belonging while foregrounding the lasting social and material legacies of movements so often relegated to the past.
AUTHOR BIOGRAPHY
Juan Herrera is Assistant Professor of Geography at the University of California, Los Angeles.
TABLE OF CONTENTS