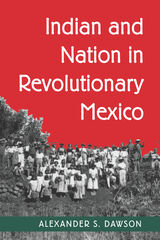 During the 1920s and 1930s in Mexico, both intellectuals and government officials promoted ethnic diversity while attempting to overcome the stigma of race in Mexican society. Programs such as the Indigenista movement represented their efforts to redeem the Revolution's promise of a more democratic future for all citizens. This book explores three decades of efforts on the part of government officials, social scientists, and indigenous leaders to renegotiate the place of native peoples in Mexican society. It traces the movement's origins as a humanitarian cause among intellectuals, the involvement of government in bringing education, land reform, cultural revival, and social research to Indian communities, and the active participation of Indian peoples.

Traditionally, scholars have seen Indigenismo as an elitist formulation of the "Indian problem." Dawson instead explores the ways that the movement was mediated by both elite and popular pressures over time. By showing how Indigenismo was used by a variety of actors to negotiate the shape of the revolutionary state—from anthropologist Manual Gamio to President Lázaro Cárdenas—he demonstrates how it contributed to a new "pact of domination" between indigenous peoples and the government.

Although the power of the Indigenistas was limited by the face that "Indian" remained a racial slur in Mexico, the indígenas capacitados empowered through Indigenismo played a central role in ensuring seventy years of PRI hegemony. In studying the confluence of state formation, social science, and native activism, Dawson's book offers a new perspective for understanding the processes through which revolutionary hegemony emerged.
AUTHOR BIOGRAPHY
Alexander S. Dawson is Assistant Professor of History at Simon Fraser University.
TABLE OF CONTENTS

1 The Indian and the Nation
2 The Problems and Promise of the Internados Indígenas
3 Science and State Formation in the Departamento de Asuntos Indígenas
4 Empowering the Masses at the Congresos Regionales Indígenas
5 Indigenismo in the Shadow
Conclusion: The Indígena Capacitado