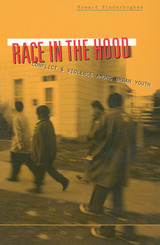 Race In The Hood: Conflict and Violence among Urban Youth
by Howard Pinderhughes
University of Minnesota Press, 1997
Paper: 978-0-8166-2919-0
Why are racial conflict and violence among the most enduring problems in American society? Why do some youths express racism violently while others develop tolerance and respect for those who are different? What can we as a society do to foster open-mindedness among children and teenagers?

Seeking answers to these questions, Howard Pinderhughes spent two years talking to and studying three groups of New York City adolescents: the predominantly Italian American Avenue T Boys from the Bensonhurst section of Brooklyn; a group of African American teenagers from Schomberg Plaza in East Harlem; and a group of Albanian American youth from Pelham Park in the Bronx. Through the voices of these young people, Pinderhughes examines how racial attitudes and identities develop in communities and are then expressed as either tolerance, resulting in territorial cooperation, or hatred, resulting in racial conflict.

Race in the Hood draws a picture of young people who grew up in similar class circumstances, facing remarkably similar problems and issues, with one significant difference in their lives--their race or ethnicity. Pinderhughes argues that the key to success in developing racial tolerance lies in the transformation of racialized grassroots ideologies through community and school-based multicultural education.

A sophisticated and nuanced study of race relations in New York City, Race in the Hood points to areas of concern and directions for change in all of our communities.

"This book examines factors that produce ethnic and racial conflict and violence among youth in New York. Drawing on a survey questionnaire and on focus group interviews, he locates ethnic hostilities and racisms within a complex environment shaped by factors operating at several levels. While fully recognising the importance of economic and other structural forces, he also reveals the central role that communities and peer groups may play in the production and reproduction of ethnic allegiances, and in racist hostilities." Canadian Journal of Urban Research

"This work should be read by those interested in urban sociology, crime, race and ethnic relations, and violence. Few contemporary authors give us a flavorful account of adolescents and race/ethnic conflict as it is played out in the real world. Pinderhughes does, and he should be applauded." Contemporary Sociology

"Should be read by all who hope to end the violence that divides our youth." MultiCultural Review

Howard Pinderhughes is assistant professor in the Department of Social and Behavioral Sciences at the University of California, San Francisco.