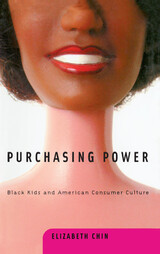 An exposÃ© of the realities facing poor black children in our consumer society.

What does it mean to be young, poor, and black in our consumer culture? Are black children "brand-crazed consumer addicts" willing to kill each other over a pair of the latest Nike Air Jordans or Barbie backpack? In this first in-depth account of the consumer lives of poor and working-class black children, Elizabeth Chin enters the world of children living in hardship in order to understand the ways they learn to manage living poor in a wealthy society.

In order to move beyond the stereotypical images of black children obsessed with status symbols, Elizabeth Chin spent two years interviewing poor children living in New Haven, Connecticut, about where and how they spend their money. An alternate image of the children emerges, one that puts practicality ahead of status in their purchasing decisions. On a twenty-dollar shopping spree with Chin, one boy has to choose between a walkie-talkie set and an X-Men figure. In one of the most painful moments of her research, Chin watches as Davy struggles with his decision. He finally takes the walkie-talkie set, a toy that might be shared with his younger brother.

Through personal anecdotes and compelling stories ranging from topics such as Christmas and birthday gifts, shopping malls, Toys-R-Us, neighborhood convenience shops, school lunches, ethnically correct toys, and school supplies, Chin critically examines consumption as a medium through which social inequalities-most notably of race, class, and gender--are formed, experienced, imposed, and resisted. Along the way she acknowledges the profound constraints under which the poor and working class must struggle in their daily lives.

"Elizabeth Chin's Purchasing Power: Black Kids and American Consumer Culture has both vitality and immediacy, thanks to Natalia, Tionna, Asia, and the other pseudonymous children of Newhallville whose voices we hear. The book's purpose is well served, too, by an identifiable first-person narrator whose relationships with several of her 'subjects' grow close and affectionate. Chin's vignettes from life with the Newhallville kids are touching, funny, troubling, strange, and familiar." --Ruminator Review

"Compelling. As a result of a multilevel perspective, the reader gets to see firsthand how these African-American children struggle each day with the inequality of their economic status. Not only is this book a primer for the uninitiated in ethnographic research, it also serves as a valuable tool for the seasoned reader interested in such participant-observer studies. Chin adds significantly to the literature of an understudied area--minority children as consumers." --MultiCultural Review

Elizabeth Chin is an associate professor in the Department of Anthropology at Occidental College in Los Angeles.
TABLE OF CONTENTS