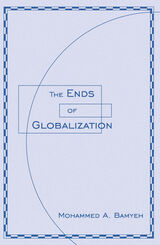 An intervention into current debates about globalization, nationalism, imperialism, and culture, this book offers a cogent critique of much of what is being said about globalization, by both the Right and the Left. In doing so, it charts the complex processes of globalization, drawing out their historical and philosophical roots and outlining the connections between cultural, political, and economic life that globalization has made, historically and in our day.

The author's orientation toward political theory and comparative civilizations-a rarity in globalization studies-allows him to detect in specific terms what is most dangerous and opportune in what is happening in the world today. Mohammed A. Bamyeh makes a compelling argument that we are witnessing a process typified by massive disjunctions between political, cultural, and economic logics on a world scale. Bamyeh demonstrates how the disruptions caused by globalization, while they blur our vision and block our rational approaches, also possess the potential to liberate the autonomous and convivial human possibilities and capabilities long shackled by such modernist institutions of governance as the nation-state.

Mohammed A. Bamyeh is associate professor at New York University, where he teaches comparative civilizations, social theory, and historical sociology. He is the author of The Social Origins of Islam (1999).
TABLE OF CONTENTS