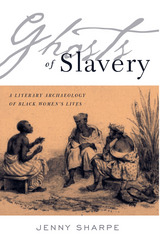 Through their open defiance, women like Harriet Tubman and Sojourner Truth had a significant impact on the institution of slavery. But what of the countless other women who did not commit public or even private acts of resistance? Are their stories worthy of our attention? While some scholars imply that only the struggle for freedom was legitimate, Jenny Sharpe complicates the linear narrative-from slavery to freedom and literacy-that emerged from the privileging of autobiographical accounts like that of Frederick Douglass. She challenges a paradigm that equates agency with resistance and self-determination, and introduces new ways to examine negotiations for power within the constraints of slavery.

In Ghosts of Slavery, Sharpe introduces a wider range of everyday practices by examining the lives of three distinctive Caribbean women: a maroon leader, a mulatto concubine, and a fugitive slave. Through them she explains how the diasporic experience of slavery enabled black women to claim an authority that they didn't possess in Africa; how concubines empowered themselves through their mimicry of white women; and how less-privileged slave women manipulated situations that they were powerless to change. Finding the highly mediated portrayal of slave women in the historical records limited and sometimes misleading, Sharpe turns to unconventional sources for investigating these women's lives. In this fascinating and historically rich account, she calls for new strategies of reading that question traditional narratives of history, and she finds alternative ways to integrate oral storytelling, slave songs, travel writing, court documents, proslavery literature, and contemporary literature into black history.

Ultimately, this layered approach not only produces a more complex picture of the slave women's agency than conventional readings, it encourages a more nuanced understanding of the roles of slaves in the history of slavery.

Jenny Sharpe is professor of English and comparative literature at the University of California, Los Angeles, and author of Allegories of Empire: The Figure of Woman in the Colonial Text (1993).