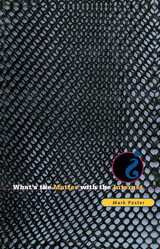 What’s the Matter with the Internet?
by Mark Poster
University of Minnesota Press, 2001
Paper: 978-0-8166-3835-2
A provocative investigation into the social and cultural implications of the Internet by a leading cultural critic.

As the Internet has become more and more a part of our daily lives, responses to its impact on culture and society have tended toward the extremes, hopeful or pessimistic. Fears that the Internet undermines community, inhibits social interaction, exacerbates economic and racial divisions, and facilitates greater state or corporate intrusion into our lives are balanced by excitement about the transformative qualities of the new medium and its potential to stimulate individual creativity, inspire new social forms, and further democratization.

In What's the Matter with the Internet?, leading cultural theorist Mark Poster offers a sophisticated and astute assessment of the potential the new medium has to redefine culture and politics. Avoiding the mindless hype and meaningless jargon that has characterized much of the debate about the future of the Web, he details what truly distinguishes the Internet from other media and the implications these novel properties have for such vital issues as authorship, national identity and global citizenship, the fate of ethnicity and race, and democracy.

Arguing that the Internet demands a social and cultural theory appropriate to the specific qualities of cyberspace, Poster reformulates the ideas of thinkers associated with our understanding of postmodern culture and the media (including Foucault, Deleuze, Heidegger, Baudrillard, and Derrida) to account for and illuminate the virtual world, paying particular attention to its political dimensions and the nature of identity. In this innovative analysis, Poster acknowledges that although the colonization of the Internet by corporations and governments does threaten to retard its capacity to bring about genuine change, the new medium is still capable of transforming both contemporary social practices and the way we see the world and ourselves.

Mark Poster is professor of history and director of the film studies program at the University of California, Irvine, and the author of Cultural History and Postmodernity (1997), The Second Media Age (1995), and The Mode of Information (1990).