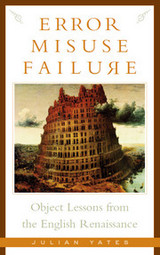 Explores what an object tells us about the culture that created it.

If certain objects work well, no one notices them. As with "black boxes," their success may be gauged by their relative invisibility-and this was the indirect goal of the objects that Julian Yates considers here: the portrait miniature, the relic, the privy (flush toilet), the printed text, and the priest-hole (a secret hiding place for Catholic priests in Protestant England).

Because each of these contrivances was prone to error, misuse, and sometimes catastrophic failure, they become in Yates's analysis an occasion for recasting the history of the English Renaissance as object lessons-"knowing from the point of view of the known." It is through such lapses-the texts and stories generated to explain away a relic that is too easily faked, a miniature that is too curiously real, the stench of a failing privy, a book that persistently sheds its pages, or the presence of so much "papist trash" in an ostensibly reformed England-that Yates recovers the silent work of "things" in cultural production.

Drawing object lessons from failing technological devices, Error, Misuse, Failure plumbs the foundations of Renaissance culture in England, recovering a curious language of mistakes, dirt, and parasitism that associates the failures of these "things" with the figures of Rome, Catholicism, and Sodom. Yates offers a mode of historical inquiry rooted in material culture, sensitive to the way humans induct nonhumans (animals, plants, and manufactured things) into their communities. Historically, the book offers a new set of stories about the rise of printing, the development of domestic architecture, and England's Catholic community-stories that remind readers of the ways in which attending to the history of nonhumans requires a radical rethinking of historical landmarks and boundaries.

Julian Yates is associate professor of English at the University of Delaware.