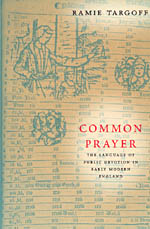 Common Prayer explores the relationship between prayer and poetry in the century following the Protestant Reformation. Ramie Targoff challenges the conventional and largely misleading distinctions between the ritualized world of Catholicism and the more individualistic focus of Protestantism. Early modern England, she demonstrates, was characterized less by the triumph of religious interiority than by efforts to shape public forms of devotion. This provocatively revisionist argument will have major implications for early modern studies.

Through readings of William Shakespeare's Hamlet, Richard Hooker's Lawes of Ecclesiastical Politie, Philip Sidney's Apology for Poetry and his translations of the Psalms, John Donne's sermons and poems, and George Herbert's The Temple, Targoff uncovers the period's pervasive and often surprising interest in cultivating public and formalized models of worship. At the heart of this study lies an original and daring approach to understanding the origins of devotional poetry; Targoff shows how the projects of composing eloquent verse and improving liturgical worship come to be deeply intertwined. New literary practices, then, became a powerful means of forging common prayer, or controlling private and otherwise unmanageable expressions of faith.
AUTHOR BIOGRAPHY
Ramie Targoff is an assistant professor of English at Yale University.
TABLE OF CONTENTS