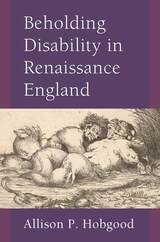 Human variation has always existed, though it has been conceived of and responded to variably. Beholding Disability in Renaissance England interprets sixteenth- and seventeenth-century literature to explore the fraught distinctiveness of human bodyminds and the deliberate ways they were constructed in early modernity as able, and not. Hobgood examines early modern disability, ableism, and disability gain, purposefully employing these contemporary concepts to make clear how disability has historically been disavowed—and avowed too. Thus, this book models how modern ideas and terms make the weight of the past more visible as it marks the present, and cultivates dialogue in which early modern and contemporary theoretical models are mutually informative.

Beholding Disability also uncovers crucial counterdiscourses circulating in the English Renaissance that opposed cultural fantasies of ability and had a keen sensibility toward non-normative embodiments. Hobgood reads impairments as varied as epilepsy, stuttering, disfigurement, deafness, chronic pain, blindness, and castration in order to understand not just powerful fictions of ability present during the Renaissance but also the somewhat paradoxical, surprising ways these ableist ideals provided creative fodder for many Renaissance writers and thinkers. Ultimately, Beholding Disability asks us to reconsider what we think we know about being human both in early modernity, and today.
AUTHOR BIOGRAPHY

Allison P. Hobgood is an Affiliated Scholar at Willamette University.