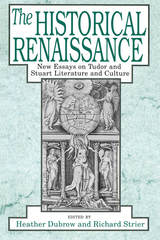 The Historical Renaissance both exemplifies and examines the most influential current in contemporary studies of the English Renaissance: the effort to analyze the interplay between literature, history, and politics. The broad and varied manifestations of that effort are reflected in the scope of this collection. Rather than merely providing a sampler of any single critical movement, The Historical Renaissance represents the range of ways scholars and critics are fusing what many would once have distinguished as "literary" and "historical" concerns

The volume includes studies of mid-Tudor culture as well as of Elizabethan and Stuart periods.
The scope of the collection is also manifest in its list of contributors. They include historians and literary critics, and their work spans he spectrum from more traditional methods to those characteristic of what has been termed "New Historicism."One aim of the book is to investigate the apparent division between these older and more current approaches. Heather Dubrow and Richard Strier evaluate the contemporary interest in historical studies of the Renaissance, relating it to previous developments in the field, surveying its achievements and limitations, and suggesting new directions for future work.
AUTHOR BIOGRAPHY
Heather Dubrow, professor of English at Carleton College, is the author of Genre and Captive Victors: Shakespeare's Narrative Poems and Sonnets.
Richard Strier, professor of English at the University of Chicago, is the author of Love Known: Theology and Experience in George Herbert's Poetry.
TABLE OF CONTENTS

Part I: The Mid-Tudor Scene

Cymbeline and the Unease of Topicality
Leah S. Marcus

Part 3: Poets, Courtiers, and the Monarchy

Sidney and his Queen
Maureen Quilligan

"The Sun in Water": Donne's Somerset Epithalamium and the Poetics of Patronage
Heather Dubrow

Law and Ideology: The Civil Law and Theories of Absolutism in Elizabethan and Jacobean England
Brian P. Levack

Part 4: Humanism and Its Discontents

Spenser, Bacon, and the Myth of Power
Clark Hulse

From Matron to Monster: Tudor-Stuart London and the Languages of Urban Description
Lawrence Manley