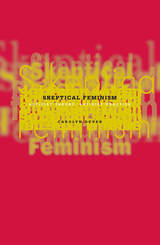 A clarion call for a new approach to feminist thought.

In this major work, Carolyn Dever considers the ambivalence or outright hostility many feminists feel toward theory, arguing that a fundamental skepticism toward abstraction has been vital to the development of the movement.

Dever analyzes the politics of feminist theory by looking at its popular, activist, and academic modes, from the liberation movements of the 1970s to gender and queer studies now. Using key moments in the history of modern feminism--consciousness-raising, best-selling books like Sexual Politics by Kate Millett and The Women's Room by Marilyn French, and media representations of women's struggle for equality--Dever outlines heated debates over psychoanalysis, sexuality, and activism.

The abstract and the grounded converge in discussions about the relationship between the feminist mind and the feminist body and in the preoccupation, both uneasy and utopian, with lesbian sexuality. Powerful, illuminating, and galvanizing, Skeptical Feminism traces the strategies the women's movement has used to make theory matter--and points toward a new, politically engaged approach to feminist thought.

Carolyn Dever is associate professor of English and acting director of women's studies at Vanderbilt University. She is the author of Death and the Mother from Dickens to Freud (1998) and coeditor (with Margaret Cohen) of The Literary Channel (2002).
TABLE OF CONTENTS