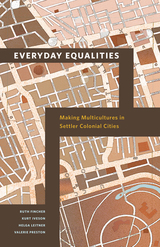 A timely new look at coexisting without assimilating in multicultural cities

If city life is a “being together of strangers,” what forms of being together should we strive for in cities with ethnic and racial diversity? Everyday Equalities seeks evidence of progressive political alternatives to racialized inequality that are emerging from everyday encounters in Los Angeles, Melbourne, Sydney, and Toronto—settler colonial cities that, established through efforts to dispossess and eliminate indigenous societies, have been destinations for waves of immigrants from across the globe ever since.

Everyday Equalities finds such alternatives being developed as people encounter one another in the process of making a home, earning a living, moving around the city, and forming collective actions or communities. Here four leading scholars in critical urban geography come together to deliver a powerful and cohesive message about the meaning of equality in contemporary cities. Drawing on both theoretical reflection and urban ethnographic research, they offer the formulation “being together in difference as equals” as a normative frame to reimagine the meaning and pursuit of equality in today’s urban multicultures.

As the examples in Everyday Equalities indicate, much emotional labor, combined with a willingness to learn from each other, negotiate across differences, and agitate for change goes into constructing environments that foster being together in difference as equals. Importantly, the authors argue, a commitment to equality is not only a hope for a future city but also a way of being together in the present.

Ruth Fincher is Redmond Barry Distinguished Professor Emeritus in the School of Geography at the University of Melbourne.

Kurt Iveson is associate professor of urban geography at the University of Sydney.

Helga Leitner is professor of geography at the University of California at Los Angeles.

Valerie Preston is professor of geography at York University.