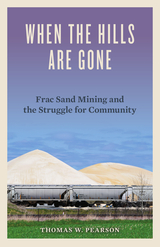 Fracking is one of the most controversial methods of fossil fuel extraction in the United States, but a great deal about it remains out of the public eye. In Wisconsin it has ignited an unprecedented explosion in the state’s sand mining operations, an essential ingredient in hydraulic fracturing that has shaken local communities to the core.

In When the Hills Are Gone, Thomas W. Pearson reveals the jolting impact of sand mining on Wisconsin’s environment and politics. A source of extraordinary wealth for a lucky few, and the cause of despoiled land for many others, sand mining has raised alarm over air quality, water purity, noise, blasting, depressed tourism, and damage to the local way of life. It has also spurred a backlash in a grassroots effort that has grown into a mature political movement battling a powerful mining industry.

When the Hills Are Gone tells the story of Wisconsin’s sand mining wars. Providing on-the-ground accounts from both the mining industry and the concerned citizens who fought back, Pearson blends social theory, ethnography, stirring journalism, and his own passionate point of view to offer an essential chapter of Wisconsin’s history and an important episode in the national environmental movement. Digging deep into the struggles over place, community, and local democracy that are occurring across the United States, When the Hills Are Gone gives vital insight into America’s environmental battles along the unexpected frontlines of energy development.

Thomas W. Pearson is associate professor of anthropology and assistant director of the Honors College at the University of Wisconsin-Stout. His research has been published in American Anthropologist, Cultural Anthropology, American Ethnologist, Human Organization, and other academic journals. He lives in Menomonie, Wisconsin.

6. In Pursuit of Local Democracy

7. Confronting the Next Boom