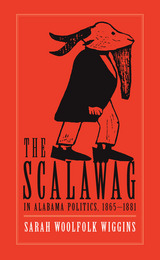 Who was this scalawag? Simply a native, white, Alabama Republican! Scorned by his fellow white Southerners, he suffered, in his desire for socioeconomic reform and political power, more than mere verbal abuse and social ostracism; he lived constantly under the threat of physical violence. When first published in 1977, Wiggin’s treatment of the scalawag was the first book-length study of scalawags in any state, and it remains the most thorough treatment. According to The Journal of American History, this is the “most effective challenge to the scalawag stereotype yet to appear.”

Sarah Woolfolk Wiggins is Professor of History at The University of Alabama and Editor of The Alabama Review.