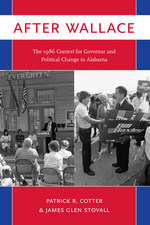 All Alabama elections are colorful, but the 1986 gubernatorial contest may trump them all for its sheer strangeness

With the retirement of an aging and ill George Wallace, both the issues and candidates contending for the office were able to set the course of Alabama politics for generations to follow. Whereas the Wallace regimes were particular to Alabama, and the gubernatorial campaign was conducted in a partial vacuum with his absence, Alabama also experienced a wave of partisan realignment. A once solidly Democratic South was undergoing a tectonic political shift as white voters in large numbers abandoned their traditional Democratic political home for the revived Republicans, a party shaped in many respects by the Wallace presidential bids of 1968 and 1972 and the Reagan revolution of the 1980s.

Alabama's own Democratic Party contributed to this massive shift with self-destructive campaign behavior that disgusted many of its traditional voters who wound up staying home or voting for a little-known Republican. From the gubernatorial election of 1986 came the shaky balance between the two parties that exists today.

After Wallace recollects and analyzes how these shifts occurred, citing extensive newspaper coverage from the time as well as personal observations and poll data collected by the authors. This volume is certain to be a valuable work for any political scientist, especially those with an interest in Alabama or southern politics.

AUTHOR BIOGRAPHY
Patrick R. Cotter is a professor of Political Science at The University of Alabama. He is co–editor of the Alabama Political Almanac and Disconnected: Public Opinion and Politics in Alabama.

James Glen Stovall is the Edward J. Meeman Distinguished Professor of Journalism at the University of Tennesee Knoxville. With Patrick R. Cotter, he is coeditor of the Alabama Political Almanac and Disconnected.
TABLE OF CONTENTS