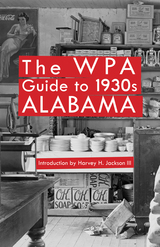 A fascinating time capsule, this classic guide captures Alabama at a critical moment in its history between the Great Depression and World War II and its aftermath.

The WPA guide to Alabama provides a unique snapshot of 1930s Alabama life and culture. Like the other state guides in the WPA's American Guide Series, it features essays on history, economy, people, folkways, education, and other characteristics of the state, as well as general information about the towns and cities. Fifteen suggested automobile tours encourage visitors and residents to explore every corner of the state, from the Gulf Coast to the Black Belt and the Tennessee Valley, from bayous to farmlands to mountain gorges.

When it was first published in 1941, the guide went far to dispel the myth of an Alabama consisting only of cotton fields, magnolias, and plantation houses by highlighting the vibrant university life in Tuscaloosa, the modern industrial activity in Birmingham, the informality of politics in Montgomery, the cultural diversity in Alabama's port city, Mobile, and the small town life in Huntsville before it became home to the space industry. The book includes a calendar of annual events, census data, and a wealth of information useful to the traveling public of the time and enlightening to readers today. The guide lists radio stations, buses, railroads, and highways as they existed before the advent of television, interstates, and malls.

Harvey Jackson's fascinating introduction assesses the guide as a historical document and recounts the involved and sometimes controversial process by which it was researched and written. Project directors struggled to make the guide palatable to its public while still addressing such issues as poverty and race relations and recognizing the state's diversity and its rich folk culture. The result makes for compelling reading for general readers and historians alike.

Harvey H. Jackson III is Professor of History at Jacksonville State University. His books include Rivers of History: Life on the Coosa, Tallapoosa, Cahaba, and Alabama and Putting Loafing Stream to Work: The Building of Lay, Mitchell, Martin, and Jordan Dams, 1910-1929, both published by The University of Alabama Press.

REVIEWS
"How this volume was compiled and edited and how for a generation it came to be the definitive interpretation of the state's past are detailed in Harvey Jackson's sensitive introduction to this reprint. The story tells much about the people of Alabama and their perceptions of the state and its history. The WPA Guide to 1930s Alabama evokes the time of its compilation and helps us understand this era. It is a must for the bookshelves of Alabama's citizens, and Jackson's introduction is invaluable to understanding the full significance of the Guide to the state's history."
—Leah Rawls Atkins, Auburn University
— -