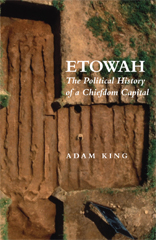 This is a detailed reconstruction of the waxing and waning of political fortunes among the chiefly elites at an important center of the prehistoric world.

At the time the first Europeans arrived in the New World, thousands of earthen platform mounds dotted the landscape of eastern North America. Only a few of the mound sites have survived the ravages of time and the devastation of pilferers; one of these valuable monuments is Etowah, located near Cartersville in northern Georgia. Over a period of more than 100 years, excavations of the site’s six mounds, and in particular Mound C, have yielded a wealth of artifacts, including marble statues, copper embossed plates, ceremonial items, and personal adornments. These objects indicate an extensive trading network between Mississippian centers and confirm contact with Spanish conquistadores near Etowah in the mid-1500s.

Adam King has analyzed the architecture and artifacts of Etowah and deduced its vital role in the prehistory of the area. He advances a plausible historical sequence and a model for the ancient town's complex political structure. The chiefdom society relied upon institutional social ranking, permanent political offices, religious ideology, a redistribution of goods and services, and the willing support of the constituent population. King reveals strategies used by the paramount chiefs to maintain their sources of power and to control changes in the social organization. Elite alliances did not necessarily involve the extreme asymmetry of political domination and tribute extraction. King's use of ceramic assemblages recovered from Etowah to determine the occupation history and the construction sequence of public facilities (mounds and plazas) at the center is significant.

This fresh interpretation of the Etowah site places it in a contemporary social and political context with other Mississippian cultures. It is a one-volume sourcebook for the Etowah polity and its neighbors and will, therefore, command an eager audience of scholars and generalists.

Adam King is an archaeologist with the Savannah River Archaeological Research Program in Columbia, South Carolina.