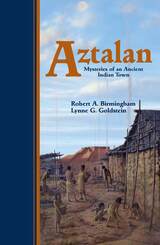 Aztalan has remained a mystery since the early nineteenth century when it was discovered by settlers who came to the Crawfish River, fifty miles west of Milwaukee. Who were the early indigenous people who inhabited this place? When did they live here? Why did they disappear?

Birmingham and Goldstein attempt to unlock some of the mysteries, providing insights and information about the group of people who first settled here in 1100 AD. Filled with maps, drawings, and photographs of artifacts, this small volume examines a time before modern Native American people settled in this area.
AUTHOR BIOGRAPHY

"An exciting read for both the general public and professionals, in Aztalan the authors bring us the story of native life in the Old Midwest as it really was with all its joys and sorrows." (Tom Emerson, University of Illinois at Urbana-Champaign)
"Aztalan has fired the imagination of generations of Wisconsin residents. Robert A. Birmingham and Lynne G. Goldstein trace the story of the public's fascination with Aztalan and the archaeological investigations that have been undertaken. This book provides the most current and up-to-date synthesis of Wisconsin's first farming town." (John H. Broihahn, Wisconsin State Archaeologist)