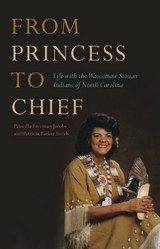 A collaborative life history of Priscilla Freeman Jacobs, From Princess to Chief tells the story of the first female chief (from 1986 to 2005) of the state-recognized Waccamaw Siouan Indian Tribe of North Carolina.
In From Princess to Chief, Priscilla Freeman Jacobs and Patricia Barker Lerch detail Jacobs’s birth and childhood, coming of age, education, young adulthood, marriage and family, Indian activism, and spiritual life. Jacobs is descended from a family of Indian leaders whose activism dates back to the early twentieth century. Her ancestors pressured the local county and state governments to fund their Indian schools, led the drive for the Waccamaw Sioux to be recognized as Indians in state and federal legislation, and finally succeeded in opening the long-awaited Indian schools in the 1930s.
Jacobs’s lasting legacies to her community include the many initiatives on which she collaborated with her father, Clifton Freeman, including the acquisition of common land for the tribe, initiation of a tribal board of directors, incorporation of a development association, and the establishment of a day care and many other social and educational programs. In the 1970s Jacobs served on the North Carolina Commission of Indian Affairs and was active in the Coalition of Eastern Native Americans.
Introducing the powwow as a way for young people to learn about the traditions of Indian people throughout the state of North Carolina, Jacobs taught many children how to dance and wear Indian regalia with pride and dignity. Throughout her life, Jacobs has worked hard to preserve the traditional customs of her people and to teach others about the folk culture that shaped and molded her as a person.
Told from the point of view of an eyewitness to the community’s effort to win federal recognition in 1950 and their lives since, From Princess to Chief helps preserve the story of Jacobs’s Indian community.

AUTHOR BIOGRAPHY
Priscilla Freeman Jacobs is a pastor, great-grandmother, grandmother, mother, and wife. She lives with her family in North Carolina.
Patricia Barker Lerch received a PhD from the Ohio State University in 1978. Lerch is a professor of cultural anthropology at the University of North Carolina–Wilmington. She is the author of several books, including Waccamaw Legacy: Contemporary Indians Fight for Survival, and many articles.
REVIEWS
“From Princess to Chief makes an important contribution to American Indian and Southern studies. This book makes a significant addition to the literature of American Indian women’s life histories, especially with respect to both the members of unrecognized Indian groups and eastern North America generally that are severely underrepresented in the literature.”--J. Anthony Paredes, editor of Indians of the Southeastern United States in the Late Twentieth Century and coeditor of Red Eagle's Children: “Weatherford vs. Weatherford et al.”
— -