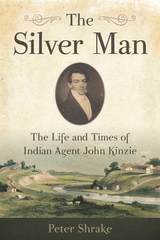 In The Silver Man: The Life and Times of John Kinzie, readers witness the dramatic changes that swept the Wisconsin frontier in the early and mid-1800s, through the life of Indian agent John Harris Kinzie. From the War of 1812 and the monopoly of the American Fur Company, to the Black Hawk War and the forced removal of thousands of Ho-Chunk people from their native lands—John Kinzie’s experience gives us a front-row seat to a pivotal time in the history of the American Midwest.

As an Indian agent at Fort Winnebago—in what is now Portage, Wisconsin—John Kinzie served the Ho-Chunk people during a time of turbulent change, as the tribe faced increasing attacks on its cultural existence and very sovereignty, and struggled to come to terms with American advancement into the upper Midwest. The story of the Ho-Chunk Nation continues today, as the tribe continues to rebuild its cultural presence in its native homeland.

AUTHOR BIOGRAPHY
Peter Shrake holds a masters degree from UW-Eau Claire focusing on Indian/White relations in Wisconsin. The subject of his thesis was the Menominee Treaty of 1831. He also earned a masters of library and information studies from the University of Wisconsin. Shrake has worked in the museum field in one form or another for over 14 years. He was the executive director of the Sauk County Historical Museum for eight years. For three years he worked for the Library/Archives Division of the Wisconsin Historical Society as a reference archivist. Currently he is the archivist at Circus World Museum. Shrake has spent nearly 20 years studying early 19th century Indian affairs and Indian agents in Wisconsin. He as published three articles relating to the early 19th century Wisconsin. His first article 'Justice or Revenge' was published in Voyageur: Northeast Wisconsin's Historical Review and related the history of the Menominee Indians in the Black Hawk War. His second article, 'Chasing and Elusive War' about the Illinois Militia in the Winnebago War of 1827 was published in the Journal of Illinois History. Most recently Shrake wrote 'The Silver Man' an article on the life of John H. Kinzie published in the Wisconsin Magazine of History.
TABLE OF CONTENTS
Contents
Acknowledgments
Introduction
1. On the Road
2. Young John Kinzie
3. Prairie du Chien
4. The Winnebago War of 1827
5. A Trip to Washington
6. The Treaty of 1829
7. Indian Agent at the Portage
8. The Black Hawk War
9. The Agency House
10. Leaving the Portage
11. Chicago
12. Remembering John Kinzie
Notes
Index