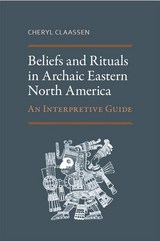 A comprehensive and essential field reference, Beliefs and Rituals in Archaic Eastern North America reveals the spiritual landscape in the American Archaic period.

Beliefs and Rituals in Archaic Eastern North America describes, illustrates, and offers nondogmatic interpretations of rituals and beliefs in Archaic America. In compiling a wealth of detailed entries, author Cheryl Claassen has created both an exhaustive reference as well as an opening into new archaeological taxonomies, connections, and understandings of Native American culture.

The material is presented in an introductory essay about Archaic rituals followed by two sections of entries that incorporate reports and articles discussing archaeological sites; studies of relevant practices of ritual and belief; data related to geologic features, artifact attributes, and burial settings; ethnographies; and pilgrimages to specific sites. Claassen’s work focuses on the American Archaic period (marked by the end of the Ice Age approximately 11,000 years ago) and a geographic area bounded by the edge of the Great Plains, Newfoundland, and southern Florida. This period and region share specific beliefs and practices such as human sacrifice, dirt mound burial, and oyster shell middens.

This interpretive guide serves as a platform for new interpretations and theories on this period. For example, Claassen connects rituals to topographic features and posits the Pleistocene-Holocene transition as a major stimulus to Archaic beliefs. She also expands the interpretation of existing data previously understood in economic or environmental terms to include how this same data may also reveal spiritual and symbolic practices. Similarly, Claassen interprets Archaic culture in terms of human agency and social constraint, bringing ritual acts into focus as drivers of social transformation and ethnogenesis.

Richly annotated and cross-referenced for ease of use, Beliefs and Rituals in Archaic Eastern North America will benefit scholars and students of archaeology and Native American culture. Claassen’s overview of the archaeological record should encourage the development of original archaeological and historical connections and patterns. Such an approach, Claassen suggests, may reveal patterns of influence extending from early eastern Americans to the Aztec and Maya.
AUTHOR BIOGRAPHY

Cheryl Claassen is a professor of anthropology at Appalachian State University, the author of Feasting with Shellfish in the Southern Ohio Valley: Archaic Sacred Sites and Rituals, and coeditor of Women in Prehistory: North America and Mesoamerica.