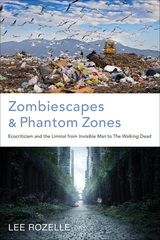 In Zombiescapes and Phantom Zones: Ecocriticism and the Liminal from “Invisible Man” to “The Walking Dead,” Lee Rozelle chronicles the weirdest, ugliest, and most mixed-up characters to appear on the literary scene since World War II—creatures intimately linked to damaged habitats that rise from the muck, not to destroy or rule the world, but to save it. The book asks what happens to these landscapes after the madness, havoc, and destruction. What monsters and magic surface then?

Rozelle argues that zombiescapes and phantom zones depicted in the book become catalysts for environmental reanimation and sources of hope. Liminality offers exciting and useful new ways to conceptualize places that have historically proven troublesome, unwieldy, or hard to define. Zombiescapes can reduce the effects of pollution, promote environmental justice, lessen economic disparity, and localize food production. The grotesques that ooze and crawl from these passages challenge readers to consider new ways to re-inhabit broken lands at a time when energy efficiency, fracking, climate change, the Pacific trade agreement, local food production, and sustainability shape the intellectual landscape.

Rozelle focuses on literary works from 1950 to 2015—the zombiescapes and monsterscapes of post–World War II literature—that portray in troubling and often devastating ways the “brownfields” that have been divested of much of their biodiversity and ecological viability. However, he also highlights how these literary works suggest a new life and new potential for such environments. With an unlikely focus on places of ruination and an application of interdisciplinary, transnational approaches to a range of fields and texts, Rozelle advances the notion that places of distortion might become a nexus where revelation and advocacy are possible again.