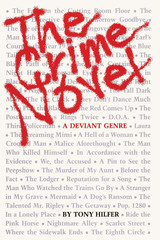 Although rarely distinguished from the detective story, the crime novel offers readers a quite different experience. In the detective novel, a sympathetic detective figure uses reason and intuition to solve the puzzle, restore order, and reassure readers that "right" will always prevail. In the crime novel, by contrast, the "hero" is either the killer, the victim, a guilty bystander, or someone falsely accused, and the crime may never be satisfactorily solved.

These and other fundamental differences are set out by Tony Hilfer in The Crime Novel, the first book that completely defines and explores this popular genre. Hilfer offers convincing evidence that the crime novel should be regarded as a genre distinct from the detective novel, whose conventions it subverts to develop conventions of its own.

Hilfer provides in-depth analyses of novels by Georges Simenon, Margaret Millar, Patricia Highsmith, and Jim Thompson. He also treats such British novelists as Patrick Hamilton, Shelley Smith, and Marie Belloc Lowndes, as well as the American novelists Cornell Woolrich, John Franklin Bardin, James M. Cain, and Fredric Brown. In addition, he defines the distinctions between the American crime novel and the British, showing how their differences correspond to differences in American and British detective fiction.

This well-written study will appeal to a general audience, as well as teachers and students of detective and mystery fiction. For anyone interested in the genre, it offers valuable suggestions of "what to read next."

AUTHOR BIOGRAPHY
Tony Hilfer (1936-2008) was Professor of English at the University of Texas at Austin.
REVIEWS
Tony Hilfer's probing study of the genre of crime fiction is at least as thought provoking and intriguing as the novels under consideration.... Whether one's interest in crime fiction is scholarly or recreational, this study will provide tremendous insight into the psychosocial implications of this 'deviant genre.'
— Rocky Mountain Review of Language and Literature

[Hilfer] covers most of the major writers of crime novels and deals intelligently and interestingly with the major theme and forms of the genre .... [This] is a significant and original contribution to a field which has never been adequately treated before.
— John G. Cawelti, Professor of English, University of Kentucky