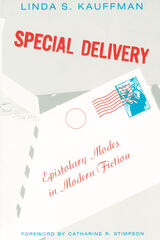 Though letter writing is almost a lost art, twentieth-century writers have mimed the epistolary mode as a means of reevaluating the theme of love. In Special Delivery, Linda S. Kauffman places the narrative treatment of love in historical context, showing how politics, economics, and commodity culture have shaped the meaning of desire.

Kauffman first considers male writers whose works, testing the boundaries of genre and gender, imitate love letters: Viktor Shklovsky's Zoo, Vladimir Nabokov's Lolita, Roland Barthes's A Lover's Discourse, and Jacques Derrida's The Post Card. She then turns to three novels by women who are more preoccupied with politics than passion: Doris Lessing's The Golden Notebook, Alice Walker's The Color Purple, and Margaret Atwood's The Handmaid's Tale. By juxtaposing these "women's productions" with the men's "production of Woman," Special Delivery dismantles the polarities between male and female, theory and fiction, high and low culture, male critical theory, and feminist literary criticism. Kauffman demonstrates how all seven texts mercilessly expose the ideology of individualism and romantic love; each presents alternate paradigms of desire, wrested from Oedipus, grounded in history and politics, giving epistolarity a distinctively postmodern stamp.
AUTHOR BIOGRAPHY
Linda S. Kauffman is professor of English at the University of Maryland.
TABLE OF CONTENTS


Foreword
Acknowledgments
Prologue
List of Abbreviations
Part One - Producing Woman
1. From Russia with Love: Zoo, or Letters Not about Love
Historical Background and Theoretical Coordinates
Generic Reaccentuation and Innovation in Zoo
Shklovsky's Addresses: Dialogic Contestation
The Production of Woman
Elsa Triolet's Letters in Zoo
2. Framing Lolita: Is There a Woman in the Text?
Episolarity in Lolita
Literature as Social Change or Aesthetic Bliss
Reading Dialogically: Lolita's Other Analogues
Is There a Woman in the Text?
3. Dangerous Liasons: Roland Barthes's A Lover's Discourse and Jacques Derrida's The Post Card
The Production of the Text
The Deconstruction of Story and Plot
The Deconstruction of Character and Identity
The Role of the Addressee
The Production of Woman
Feminist Critiques of Barthes and Derrida
Part Two - Women's Productions
4. The Golden Notebook: Anna Wulf's Schizoanalysis
Sexuality, Sexual Politics, and the Displacement of Identity
Psychoanalysis and Its Discontents
Global Politics and the Social Genesis of Psychosis
Lessing's Critique of the Realistic Novel
5. Constructing Otherness: Struggles of Representation in The Color Purple
Epistolary Precursors
Slave Narratives as Generic Predecessors
Constructing Otherness by Gender and Tribe
Walker's Vision of History and Utopia
Steven Spielberg's The Color Purple
6. Twenty-first Century Epistolarity in The Handmaid's Tale
Masculine Writing/Feminine Speech: Atwood's Episolary Antecedents
Docile Bodies: An Anatomy of Ideology
Epilogue
Index