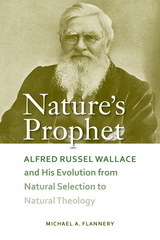 A spiritualist, libertarian socialist, women’s rights advocate, and critic of Victorian social convention, Alfred Russel Wallace was in every sense a rebel who challenged the emergent scientific certainties of Victorian England by arguing for a natural world imbued with purpose and spiritual significance. Nature’s Prophet:Alfred Russel Wallace and His Evolution from Natural Selection to Natural Theology is a critical reassessment of Wallace’s path to natural theology and counters the dismissive narrative that Wallace’s theistic and sociopolitical positions are not to be taken seriously in the history and philosophy of science.

Author Michael A. Flannery provides a cogent and lucid account of a crucial—and often underappreciated—element of Wallace’s evolutionary worldview. As co-discoverer, with Charles Darwin, of the theory of natural selection, Wallace willingly took a backseat to the well-bred, better known scientist. Whereas Darwin held fast to his first published scientific explanations for the development of life on earth, Wallace continued to modify his thinking, refining his argument toward a more controversial metaphysical view which placed him within the highly charged intersection of biology and religion.

Despite considerable research into the naturalist’s life and work, Wallace’s own evolution from natural selection to natural theology has been largely unexplored; yet, as Flannery persuasively shows, it is readily demonstrated in his writings from 1843 until his death in 1913. Nature’s Prophet provides a detailed investigation of Wallace’s ideas, showing how, although he independently discovered the mechanism of natural selection, he at the same time came to hold a very different view of evolution from Darwin.

Ultimately, Flannery shows, Wallace’s reconsideration of the argument for design yields a more nuanced version of creative and purposeful theistic evolution and represents one of the most innovative contributions of its kind in the Victorian and Edwardian eras, profoundly influencing a later generation of scientists and intellectuals.
AUTHOR BIOGRAPHY
Michael A. Flannery is a professor emeritus of libraries at the University of Alabama at Birmingham. He is the author of Alfred Russel Wallace: A Rediscovered Life and editor of Alfred Russel Wallace’s Theory of Intelligent Evolution: How Wallace’s World of Life Challenged Darwinism.
TABLE OF CONTENTS

Chapter 2. The Spirit of Science

Chapter 4. The Science of Spirit

Epilogue. Wallace and the Historian’s Craft