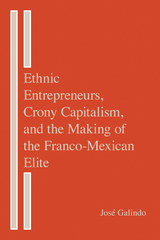 A groundbreaking historical narrative of corruption and economic success in Mexico

Ethnic Entrepreneurs, Crony Capitalism, and the Making of the Franco-Mexican Elite provides a new way to understand the scope and impact of crony capitalism on institutional development in Mexico. Beginning with the Porfiriato, the period between 1876 and 1911 named for the rule of President Porfirio Díaz, José Galindo identifies how certain behavioral patterns of the Mexican political and economic elite have repeated over the years, and analyzes aspects of the political economy that have persisted, shaping and at times curtailing Mexico’s economic development.

Strong links between entrepreneurs and politicians have allowed elite businessmen to receive privileged support, such as cheap credit, tax breaks, and tariff protection, from different governments and to run their companies as monopolies. In turn, successive governments have obtained support from businesses to implement public policies, and, on occasion, public officials have received monetary restitution. Galindo notes that Mexico’s early twentieth-century institutional framework was weak and unequal to the task of reining in these systematic abuses. The cost to society was high and resulted in a lack of fair market competition, unequal income distribution, and stunted social mobility.

The most important investors in the banking, commerce, and manufacturing sectors at the beginning of the twentieth century in Mexico were of French origin, and Galindo explains the formation of the Franco-Mexican elite. This Franco-Mexican narrative unfolds largely through the story of one of the richest families in Mexico, the Jeans, and their cotton textile empire. This family has maintained power and wealth through the current day as Emilio Azcárraga Jean, a great-grandson of one of the members of the first generation of the Jean family to arrive in Mexico, owns Televisa, a major mass media company with one of the largest audiences for Spanish-language content in the world.
AUTHOR BIOGRAPHY
José Galindo is professor at the Instituto de Investigaciones Histórico-Sociales, Universidad Veracruzana. He is author of La CNDH: Una consecuencia de la política económica y social de México (1970–1990), editor of México contemporáneo: Aspectos económicos, políticos y sociales, and coeditor of Narrativas estatales de los sistemas estatales anticorrupción en México: Reflexiones desde lo local.

TABLE OF CONTENTS
Contents
List of Illustrations
Preface
Acknowledgments
List of Abbreviations
Introduction
Chapter One. The Development of the French Business Community in Mexico during the Nineteenth Century
Chapter Two. Crony Capitalism in the Late Nineteenth and Early Twentieth Centuries: General and Theoretical Considerations
Chapter Three. The Expansion of a Successful French Business Family in Mexico
Chapter Four. Labor, the Decline of the Textile Business, and the Future of Foreign Immigrants in Mexico
Chapter Five. Reflections on Corruption in Mexico
Conclusion
Notes
Bibliography
Index