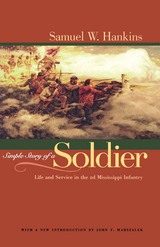 This fast-paced memoir was written in 1905 by 61-year-old Samuel W. Hankins while he was living in the Soldiers Home in Gulfport, Mississippi. It vividly details his years as a Confederate rifleman from the spring of 1861, when at a mere sixteen years of age he volunteered for the 2d Mississippi Infantry, through the end of the war in 1865, when he was just twenty years old and maimed for life.

The 2d Mississippi was part of the Army of Northern Virginia and as such saw action at Bull Run/Manassas, Seven Pines and the Peninsular Campaign, and Gettysburg. Besides being hospitalized with measles, suffering severely frostbitten feet, and being wounded by a minié ball at the Railroad Cut, Hankins was captured by Federal forces and sent to a prisoner of war camp on David’s Island, New York. Later, he was transferred to a South Carolina hospital, returned home on furlough, joined a cavalry unit that fought at Atlanta, and was stationed in Selma, Alabama, when the war ended.

The strength of Hankins’s text lies in his straightforward narrative style virtually free of Lost Cause sentiment. Both Union and Confederate veterans could relate to his stories because so many of them had faced similar challenges during the war. Full of valuable information on a common soldier’s experience, the memoir still conjures the sights, sounds, and smells of warfare.

John F. Marszalek is the retired William L. Giles Distinguished Professor at Mississippi State University and author of, among other works, Sherman: A Soldier’s Passion for Order and The Petticoat Affair: Manners, Mutiny, and Sex in Andrew Jackson’s White House.