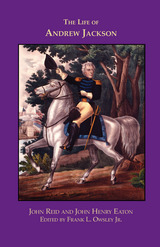 Original copies of the first, 1817, edition of this work are so rare that even the Library of Congress does not have an undamaged copy. Consequently scholars and students of Jackson have had to rely on later, incomplete or bowdlerized editions. It is therefore all the more valuable to have Owsley’s critical restoration of the original edition, complete with its useful maps.

The work is a straightforward history of Jackson’s military career, begun by John Reid, Jackson’s military aide throughout the War of 1812 and the ensuing Creek War. Reid wrote the first four chapters, and after his death John Eaton completed the work from Reid’s outline, notes, and papers. Owsley, quondam professor of history at Auburn University, has carefully restored the original edition, noted variants between this and successor editions, and included helpful apparatus, including a memoir of John Reid by Helen Reid Roberts, and indexes to the whole.

This is the first paperback edition of this valuable record and includes the original four large-scale foldout maps on an accompanying CD.
TABLE OF CONTENTS