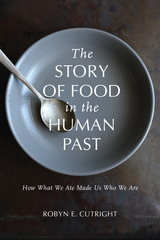 The Story of Food in the Human Past: How What We Ate Made Us Who We Are uses case studies from recent archaeological research to tell the story of food in human prehistory. Beginning with the earliest members of our genus, Robyn E. Cutright investigates the role of food in shaping who we are as humans during the emergence of modern Homo sapiens and through major transitions in human prehistory such as the development of agriculture and the emergence of complex societies.

Cutright begins her fascinating study with a discussion of how food shaped humans in evolutionary terms by examining what makes human eating unique, the use of fire to cook, and the origins of cuisine as culture and adaptation through the example of Neanderthals. The second part of the book describes how cuisine was reshaped when humans domesticated plants and animals and examines how food expressed ancient social structures and identities such as gender, class, and ethnicity. Cutright shows how food took on special meaning in feasts and religious rituals and also pays attention to the daily preparation and consumption of food as central to human society.

Cutright synthesizes recent paleoanthropological and archaeological research on ancient diet and cuisine and complements her research on daily diet, culinary practice, and special-purpose mortuary and celebratory meals in the Andes with comparative case studies from around the world to offer readers a holistic view of what humans ate in the past and what that reveals about who we are.
AUTHOR BIOGRAPHY
Robyn E. Cutright is the Charles T. Hazelrigg Associate Professor of Anthropology and Latin American Studies at Centre College.