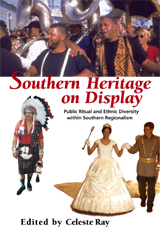 "From the jazz funeral processions in the streets of New Orleans to the annual Natchez Pilgrimage in Mississippi and the Scottish Highland games atop Grandfather Mountain in North Carolina, the reader is exposed to a diverse southern culture, or heritage, that is often overlooked by many people, both within and outside the South. The reality of a southern culture based in Mexican heritage or a celebration of [a] Southeastern tribe's heritage through the powwow helps deconstruct the myth of a solid southern culture as one that is simply portrayed as black and white."
—Florida Historical Quarterly

"The ambition Celeste Ray sets out in her introduction is to show how these groups are not only in the South but of it, how they interpret their diverse identities as Southern—put another way, to answer a question that arises in one noteworthy piece, why do Indians in North Carolina eat barbecue pork and collard greens at their powwows?"
—Journal of American Ethnic History

"Thought-provoking and well-crafted, Southern Heritage on Display is an innovative and important resource for regional studies and scholarship on public display."
—Journal of Folklore Research

W. J. Cash's 1941 observation that "there are many Souths and many cultural traditions among them" is certainly validated by this book. Although the Civil War and its "lost cause" tradition continues to serve as a cultural root paradigm in celebrations, both uniting and dividing loyalties, southerners also embrace a panoply of public rituals—parades, cook-offs, kinship homecomings, church assemblies, music spectacles, and material culture exhibitions—that affirm other identities. From the Appalachian uplands to the Mississippi Delta, from Kentucky bluegrass to Carolina piedmont, southerners celebrate in festivals that showcase their diverse cultural backgrounds and their mythic beliefs about themselves.

The ten essays of this cohesive, interdisciplinary collection present event-centered research from various fields of study—anthropology, geography, history, and literature—to establish a rich, complex picture of the stereotypically "Solid South." Topics include the Mardi Gras Indian song cycle as a means of expressing African-American identity in New Orleans; powwow performances and Native American traditions in southeast North Carolina; religious healings in southern Appalachian communities; Mexican Independence Day festivals in central Florida; and, in eastern Tennessee, bonding ceremonies of melungeons who share Indian, Scots Irish, Mediterranean, and African ancestry. Seen together, these public heritage displays reveal a rich "creole" of cultures that have always been a part of southern life and that continue to affirm a flourishing regionalism.

This book will be valuable to students and scholars of cultural anthropology, American studies, and southern history; academic and public libraries; and general readers interested in the American South. It contributes a vibrant, colorful layer of understanding to the continuously emerging picture of complexity in this region historically depicted by simple stereotypes.

Celeste Ray is Professor of Anthropology at the University of the South, Sewanee, Tennessee, and author of Highland Heritage: Scottish Americans in the American South.