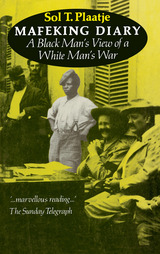 “Sol Plaatje’s Mafeking Diary is a document of enduring importance and fascination. The product of a young black South African court interpreter, just turned 23 years old when he started writing, it opens an entirely new vista on the famous Siege of Mafeking. By shedding light on the part played by the African population of the town, Plaatje explodes the myth, maintained by belligerents, and long perpetuated by both historians and the popular imagination, this this was a white man’s affair. One of the great epics of British imperial history, and perhaps the best remembered episode of the Anglo-Boer war of 1899–1902, is presented from a wholly novel perspective.

“At the same time, the diary provides an intriguing insight into the character of a young man who was to play a key role in South African political and literary history during the first three decades of this century. It reveals much of the perceptions and motives that shaped his own attitudes and intellectual development and, indeed, those of an early generation of African leaders who sought to build a society which did not determine the place of its citizens by the colour of their skin. The diary therefore illuminates the origins of a struggle which continues to this day.”

Sol Plaatje is one of South Africa’s most important political and literary figures. A pioneer in the history of the black press, he was one of the founders of the African National Congress, a leading spokesman for black opinion throughout his life, and the author of three well-known books: Mafeking Diary, Native Life in South Africa, and his historical novel, Mhudi.