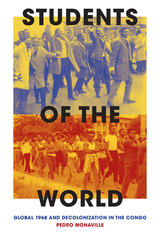 On June 30, 1960—the day of the Congo’s independence—Prime Minister Patrice Lumumba gave a fiery speech in which he conjured a definitive shift away from a past of colonial oppression toward a future of sovereignty, dignity, and justice. His assassination a few months later showed how much neocolonial forces and the Cold War jeopardized African movements for liberation. In Students of the World, Pedro Monaville traces a generation of Congolese student activists who refused to accept the foreclosure of the future Lumumba envisioned. These students sought to decolonize university campuses, but the projects of emancipation they articulated went well beyond transforming higher education. Monaville explores the modes of being and thinking that shaped their politics. He outlines a trajectory of radicalization in which gender constructions, cosmopolitan dispositions, and the influence of a dissident popular culture mattered as much as access to various networks of activism and revolutionary thinking. By illuminating the many worlds inhabited by Congolese students at the time of decolonization, Monaville charts new ways of writing histories of the global 1960s from Africa.
AUTHOR BIOGRAPHY
Pedro Monaville is Assistant Professor of History at New York University Abu Dhabi.
TABLE OF CONTENTS


Preface. Memory Work in the Age of Cinq Chantiers  ix
Note on Toponyms  xvii
Acknowledgments  xix
Introduction. The School of the World  1
Interlude I. Postal Musings  20
1. Distance Learning and the Production of Politics  23
2. Friendly Correspondence with the Whole World  42
Interlude II. To Live Forever Among Books  63
3. Paths to School  65
4. Dancing the Rumba at Lovanium  84
Interlude III. To the Left  103
5. Cold War Transcripts  109
6. Revolution in the (Counter)revolution  129
7. A Student Front  144
Interlude IV. The Dictator and the Students  161
8. (Un)natural Alliances  166
9. A Postcolonial Massacre and Caporalisation in Mobutu's Congo  179
Epilogue. The Gaze of the Dead  201
Notes  213
Bibliography  287
Index  323