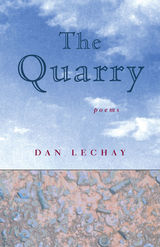 Once or twice in a generation a poet comes along who captures the essential spirit of the American Midwest and gives name to the peculiar nature that persists there. Like James Wright, Robert Bly, Ted Kooser, and Jared Carter before him, Dan Lechay reshapes our imagination to include his distinct and profound vision of this undersung region.

The poetry of Dan Lechay, collected in The Quarry, constructs a myth of the Midwest that is at once embodied in the permanence of the landscape, the fleeting nature of the seasons, and the eternal flow of the river. Lechay writes of memory and the mutability of memory, of the change brought on a person by the years lived and lost, and of the stoic attempts made by those around him to elicit an order and rationale to their lives.

The Quarry is the first full-length collection from this seasoned poet. Final judge Alan Shapiro in writing about The Quarry said: “If Dan Lechay’s poems often begin with the ordinary details and circumstances of life in a small Midwestern town or city, they always end by reminding us that no moment of life is ever ordinary, that ‘Nothing is more mysterious than the way things are.’

The Quarry is a marvelous, disquieting, extraordinarily beautiful book that meditates on fundamental questions of time and change in and through a clear-eyed yet loving evocation of everyday existence. Under Lechay’s soulful gaze, the backyards, neighborhoods, animals, and landscapes he describes dramatize the often wrenching connection between beauty and loss, evanescence and memory. The Quarry is a thoroughly mature and accomplished book.”

Dan Lechay has taught literature at the San Francisco Art Institute, the University of Iowa, and elsewhere. For ten years, he directed health and hospital investigations for the New York City Council president. His poems have appeared in many journals, including The Iowa Review, Southwest Review, and Agni.