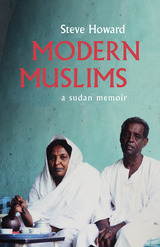 Steve Howard departed for the Sudan in the early 1980s as an American graduate student beginning a three-year journey in which he would join and live with the Republican Brotherhood, the Sufi Muslim group led by the visionary Mahmoud Mohamed Taha. Taha was a religious intellectual who participated in the early days of Sudan’s anticolonial struggle, but quickly turned his movement into a religious reform effort based on his radical reading of the Qur’an. He was executed in 1985 for apostasy.

Decades after returning to the life of an academic in the United States, Howard brings us this memoir of his time with the Republican Brotherhood, who advocated, among other things, equality for women. Modern Muslims describes Howard’s path to learning not only about Islam and Sufism but also about Sudan’s history and culture. When the Brotherhood was thrust into confrontation with Sudan’s then-president Jaafar Nimeiry, Howard had a front-line perspective on the difficult choices communities make as they try to reform and practice their faith freely.

As well as a story of personal transformation, the book offers an insider’s perspective on a modernist nonviolent Islamic movement that thrived and was brutally suppressed. An important book for our times, Modern Muslims yields significant insights for our understanding of modern Islam, African history, and contemporary geopolitics.

Steve Howard is a professor of media studies and African studies and the director of the Ohio University Center for International Studies. A sociologist by training, he has studied and worked all over the African continent. He directed Ohio University’s African Studies Program for twenty-five years and has published several scholarly articles about the Republican Brotherhood Movement.