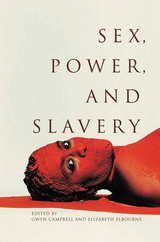 Sexual exploitation was and is a critical feature of enslavement. Across many different societies, slaves were considered to own neither their bodies nor their children, even if many struggled to resist. At the same time, paradoxes abound: for example, in some societies to bear the children of a master was a potential route to manumission for some women. Sex, Power, and Slavery is the first history of slavery and bondage to take sexuality seriously.

Twenty-six authors from diverse scholarly backgrounds look at the vexed, traumatic intersections of the histories of slavery and of sexuality. They argue that such intersections mattered profoundly and, indeed, that slavery cannot be understood without adequate attention to sexuality. Sex, Power, and Slavery brings into conversation historians of the slave trade, art historians, and scholars of childhood and contemporary sex trafficking. The book merges work on the Atlantic world and the Indian Ocean world and enables rich comparisons and parallels between these diverse areas.

Gwyn Campbell, Canada Research Chair in Indian Ocean World History at McGill University, is the author and editor of many works, including Abolition and Its Aftermath in Indian Ocean Africa and Asia and An Economic History of