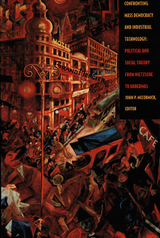 With a groundbreaking, interdisciplinary approach to German political and social theory, Confronting Mass Democracy and Industrial Technology provides fresh insight into the thought of many of the most influential intellectual figures of the twentieth century. Its essays detail the manner in which a wide range of German intellectuals grappled with the ramifications and implications of democracy, technology, knowledge, and control from the late Kaisserreich to the Weimar Republic, from the Third Reich and the Federal Republic through recently unified Germany.
Scholars representing the fields of political science, philosophy, history, law, literature, and cultural studies devote essays to the work of Nietzsche, Weber, Heidegger, Lukács, Schmitt, Marcuse, Adorno, and Habermas. They also discuss the writings of such figures as Brecht and Freud, who are not primarily thought of as political theorists, and explore the thought of Helmut Plessner and reformist theorists from East Germany who have been little studied in the English language. In the process of debating the nature and responsibilities of the modern state in an era of mass politics, unparalleled military technology, capacity for surveillance, and global media presence, the contributors question whether technology is best understood as an instrument of human design and collective control or as an autonomous entity that not only has a will and life of its own but one that forms the very fabric of modern humanity.

John McCormick is Assistant Professor of Political Science at Yale University. He is the author of Carl Schmitt’s Critique of Liberalism: Against Politics as Technology.

REVIEWS
“The contributors to Confronting Mass Democracy and Indusrial Technology are a highly diverse yet uniformly first-rate lot. This rich volume is sure to attract scholarly attention in a variety of fields. There is nothing else like it in print.”—Stephen Holmes, New York University School of Law

I. Rationality and Politics at the Outset of the Century

Love, Passion, and Maturity: Nietzsche and Weber on Science, Morality, and Politics / Tracy B. Strong

II. Strategies of Progressive Political Action in an Age of Technological Transformation

Post-Utopian Marxism: Lukacs and the Dilemmas of Organization / Andrew Feenberg

III. Socio-Literary Theory: Unlikely Sources for a Critique of Capitalism?

The Geist in the Machine: Freud, the Uncanny, and Technology / Gia Pascarelli

IV. Society and State as Machine in the Weimar Republic and the Third Reich

The Soul in the Age of Society and Technology: Helmuth Plessner’s Defensive Liberalism / Jan-Werner Muller

Leviathan in the 1930s: The Reception of Hobbes in the Third Reich / David Dyzenhaus

VI. Throwing Off the Yoke of “the German Master”

A Critical versus Genealogical “Questioning” of Technology: Notes on How Not to Read Adorno and Horkheimer / John P. McCormick

Reversing the Dialectic of Enlightenment: The Reenchantment of the World / Seyla Benhabib