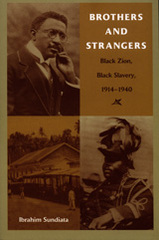 Unprecedented in scope and detail, Brothers and Strangers is a vivid history of how the mythic Africa of the black American imagination ran into the realities of Africa the place. In the 1920s, Marcus Garvey—convinced that freedom from oppression was not possible for blacks in the Americas—led the last great African American emigrationist movement. His U.S.-based Universal Negro Improvement Association worked with the Liberian government to create a homeland for African Americans. Ibrahim Sundiata explores the paradox at the core of this project: Liberia, the chosen destination, was itself racked by class and ethnic divisions and—like other nations in colonial Africa—marred by labor abuse.

In an account based on extensive archival research, including work in the Liberian National Archives, Sundiata explains how Garvey’s plan collapsed when faced with opposition from the Liberian elite, opposition that belied his vision of a unified Black World. In 1930 the League of Nations investigated labor conditions and, damningly, the United States, land of lynching and Jim Crow, accused Liberia of promoting “conditions analogous to slavery.” Subsequently various plans were put forward for a League Mandate or an American administration to put down slavery and “modernize” the country. Threatened with a loss of its independence, the Liberian government turned to its “brothers beyond the sea” for support. A varied group of white and black anti-imperialists, among them W. E. B. Du Bois, took up the country’s cause. In revealing the struggle of conscience that bedeviled many in the black world in the past, Sundiata casts light on a human rights predicament which, he points out, continues in twenty-first-century African nations as disparate as Sudan, Mauritania, and the Ivory Coast.

Ibrahim Sundiata is Spector Professor of History and African and Afro-American Studies at Brandeis University. He is the author, most recently, of From Slaving to Neoslavery: The Bight of Biafra and Fernando Po in the Era of Abolition, 1827–1930.
Click here to visit Professor Sundiata’s website.

REVIEWS
“This much needed and long awaited book is a godsend not only for its courageous handling of its controversial subject but also for the more general information that it presents in the field of Liberian history. It is indispensable work for anyone professing an interest in Black Atlantic studies.”—Wilson Jeremiah Moses, editor of Liberian Dreams: Back-to-Africa Narratives from the 1850s and Ferree Professor of American History at Pennsylvania State University