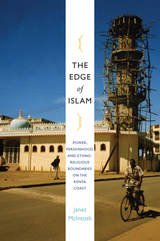 In this theoretically rich exploration of ethnic and religious tensions, Janet McIntosh demonstrates how the relationship between two ethnic groups in the bustling Kenyan town of Malindi is reflected in and shaped by the different ways the two groups relate to Islam. While Swahili and Giriama peoples are historically interdependent, today Giriama find themselves literally and metaphorically on the margins, peering in at a Swahili life of greater social and economic privilege. Giriama are frustrated to find their ethnic identity disparaged and their versions of Islam sometimes rejected by Swahili.

The Edge of Islam explores themes as wide-ranging as spirit possession, divination, healing rituals, madness, symbolic pollution, ideologies of money, linguistic code-switching, and syncretism and its alternatives. McIntosh shows how the differing versions of Islam practiced by Swahili and Giriama, and their differing understandings of personhood, have figured in the growing divisions between the two groups. Her ethnographic analysis helps to explain why Giriama view Islam, a supposedly universal religion, as belonging more deeply to certain ethnic groups than to others; why Giriama use Islam in their rituals despite the fact that so many do not consider the religion their own; and how Giriama appropriations of Islam subtly reinforce a distance between the religion and themselves. The Edge of Islam advances understanding of ethnic essentialism, religious plurality, spirit possession, local conceptions of personhood, and the many meanings of “Islam” across cultures.

Janet McIntosh is Assistant Professor of Anthropology at Brandeis University.

Introduction. The Edge of Islam 1

1. Origin Stories: The Rise of Ethnic Boundaries on the Coast 45

2. Blood Money in Motion: Profit, Personhood, and the Jini Narratives 89

4. Rethinking Syncretism: Religious Pluralism and Code Choice in a Context of Ethnoreligious Tension 177

5. Divination and Madness: The Powers and Dangers of Arabic 221