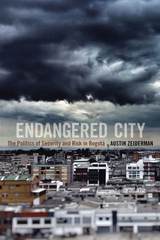 Security and risk have become central to how cities are planned, built, governed, and inhabited in the twenty-first century. In Endangered City, Austin Zeiderman focuses on this new political imperative to govern the present in anticipation of future harm. Through ethnographic fieldwork and archival research in Bogotá, Colombia, he examines how state actors work to protect the lives of poor and vulnerable citizens from a range of threats, including environmental hazards and urban violence. By following both the governmental agencies charged with this mandate and the subjects governed by it, Endangered City reveals what happens when logics of endangerment shape the terrain of political engagement between citizens and the state. The self-built settlements of Bogotá’s urban periphery prove a critical site from which to examine the rising effect of security and risk on contemporary cities and urban life.
AUTHOR BIOGRAPHY
Austin Zeiderman is an anthropologist and Assistant Professor in the Department of Geography and Environment at the London School of Economics and Political Science.
REVIEWS
-- Federico Pérez Anthropological Quarterly

Introduction. The Politics of Security and Risk  1