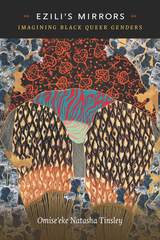 From the dagger mistress Ezili Je Wouj and the gender-bending mermaid Lasiren to the beautiful femme queen Ezili Freda, the Ezili pantheon of Vodoun spirits represents the divine forces of love, sexuality, prosperity, pleasure, maternity, creativity, and fertility. And just as Ezili appears in different guises and characters, so too does Omise’eke Natasha Tinsley in her voice- and genre-shifting, exploratory book Ezili's Mirrors. Drawing on her background as a literary critic as well as her quest to learn the lessons of her spiritual ancestors, Tinsley theorizes black Atlantic sexuality by tracing how contemporary queer Caribbean and African American writers and performers evoke Ezili. Tinsley shows how Ezili is manifest in the work and personal lives of singers Whitney Houston and Azealia Banks, novelists Nalo Hopkinson and Ana Lara, performers MilDred Gerestant and Sharon Bridgforth, and filmmakers Anne Lescot and Laurence Magloire—none of whom identify as Vodou practitioners. In so doing, Tinsley offers a model of queer black feminist theory that creates new possibilities for decolonizing queer studies.
AUTHOR BIOGRAPHY
Omise’eke Natasha Tinsley is Associate Professor of African and African Diaspora Studies at the University of Texas and author of Thiefing Sugar: Eroticism between Women in Caribbean Literature, also published by Duke University Press.
REVIEWS
-- Alexandria Smith The New Inquiry