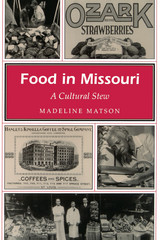 Corn, squash, and beans from the Native Americans; barbecue sauces from the Spanish; potatoes and sausages from the Germans: Missouri's foods include a bountiful variety of ingredients. In Food in Missouri: A Cultural Stew, Madeline Matson takes readers on an enticing journey through the history of this state's food, from the hunting and farming methods of the area's earliest inhabitants, through the contributions of the state's substantial African American population, to the fast-food purveyors of the microwave age.

Tracing the history of food preparation, preservation, and marketing, while highlighting the cultural traditions that engendered each change, Matson shows how advances in farming methods, the invention of the electric range, the development of cookbooks, and three waves of immigration have profoundly influenced what Missourians eat today. Along the way, she highlights some of the key people, places, and institutions in Missouri's food history: Irma S. Rombauer, author of Joy of Cooking; Stark Bro's Nurseries and Orchards in Louisiana, Missouri, the largest family-owned fruit-tree nursery in the world and the home of Delicious, Golden Delicious, and Gala apples; St. Louis's Soulard Market, established in 1779 and said to be the oldest public market west of the Mississippi; and Stone Hill Winery, a leader in Hermann's nationally recognized wine- making industry.

By bringing to life the traditions behind the foods we eat every day, Food in Missouri provides a unique perspective on the people who explored and settled the state, showing that Missouri's rich heritage truly is a cultural stew.

Madeline Matson has had a long-standing interest in food and cooking and operates a small pastry business in addition to working at the Missouri State Library, where she directs the library's Publications and Special Projects Office and coordinates its literacy program. She is also coordinator of the Missouri Center for the Book.